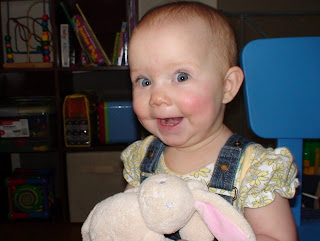 Elizabeth is nine months old today. She has been developing so many new skills! Lately she has started to imitate our actions. If we shake our heads side to side, or nod up and down, she will too! Tonight even after Vanessa said, "No, no, no," without the head movement, Elizabeth started shaking her head side to side. So, now I have to worry about her learning to imitate Vanessa's creative ways of getting in trouble... Elizabeth has learned already how to open drawers and cabinet doors and pull out interesting items. 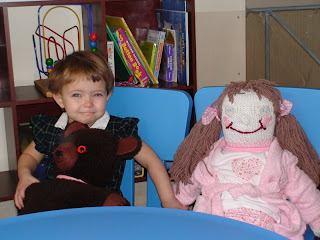 Vanessa is now two and a half. She has been developing so rapidly this month especially in her speech -- she is pretty much willing to try to pronounce or read any new word (although sometimes she'll hide under a sheet or run to the other side of the room before saying it, just in case it's not perfect!). 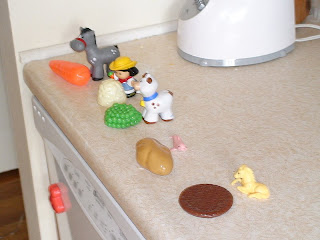 Vanessa is always making the most intriguing arrangements of objects around the house. Here's one of them. She made this "party" of animals and their meals. I understand the horse eating the carrot and the farmer eating ice cream, and maybe the cow eating peas too, but I'm not sure what to make of the dolphin eating the potato or the horse eating a hamburger. 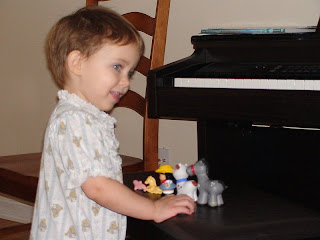 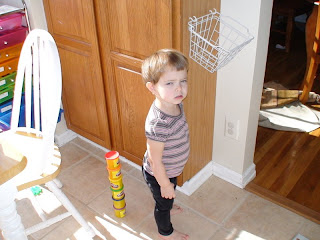 Here's another one that she likes to build frequently -- a stack of containers of Play-doh in rainbow order. The weird thing is that she insists on stacking it with the purple on the bottom, which means she has to build the rainbow in reverse order.
Like the grimace? That's another thing that Vanessa's been learning lately -- how to control her facial expressions. She's frowning deliberately to make me pretend frustration, just so that she can please me so much when she smiles. 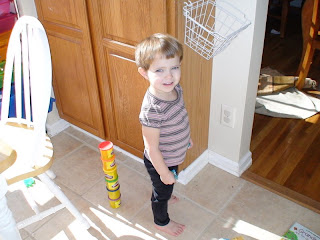 After smiling for this picture, she said, "That was a nice picture!" 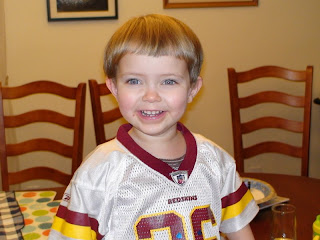 Here's another intentional smile. Now if she had just learned this before the Christmas pictures... 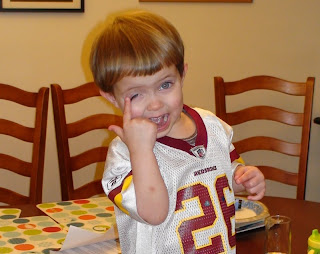 Here's a "wink." Well, that expression still needs a little work, I guess! 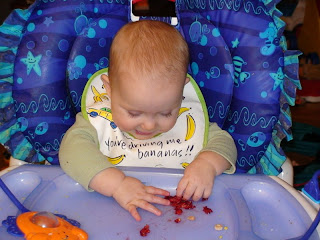 Elizabeth's dexterity is improving, and she can feed herself even these mostly mashed slippery strawberries. 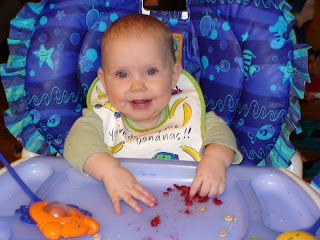 She really liked the strawberries! I hope we can provide her with strawberries and all kinds of yummy foods from our garden this year. 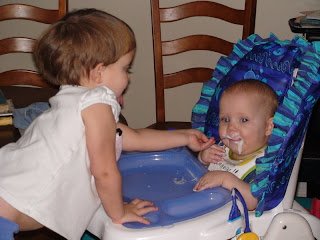 Vanessa's discovered that I will allow her to feed Elizabeth if she wants. She does a pretty good job I'd say. I love how this picture shows Vanessa sticking her tongue out. Even I can't help opening my mouth when I feed Elizabeth. What is it with that instinct? Utterly unavoidable. 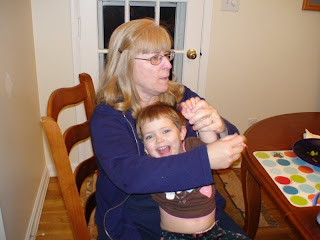 I like this picture because Nana is able to keep such a straight face while she is playing a movement game with Vanessa that just cracks Vanessa up! 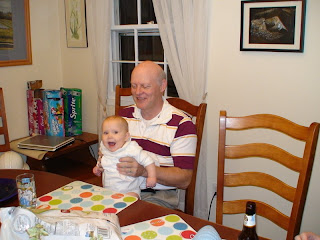 For some reason when Grampa and Nana were here last, Elizabeth decided to use Grampa's knees for a trampoline! She just started jumping and laughing and couldn't stop! Our girls are lucky to have grandparents who make them laugh so much.

Great pictures! I'm glad to see you have to great eaters. Please have them ready to give Samantha a talking to when she comes to visit next month.