So much has been going on with Elizabeth and Vanessa lately. We've been hanging around the house waiting until we're not contagious (our favorite thing to do this winter), but meanwhile:

Elizabeth has been practicing balancing and has been practicing a few first steps. She has also starting crawling in earnest. No crumb is safe from the Elizabeth monster anymore! Time to up my sweeping efforts. Elizabeth has also started showing a preference for certain toys, which makes things complicated. We used to tell Vanessa to give just any toy to Elizabeth before trading (i.e. taking toys right out of Elizabeth's hands), but now we have to come up with a new set of rules to keep Elizabeth content.

Vanessa has been inventing all kinds of interesting games to play with us. One is that she will start telling a story, "One time, when Vanessa wasn't feeling well..." and tell me to say the other words. Another is the cutest game about loneliness. One of her hands will feel "lonely," and the other hand will come near it, sort of teasing, and then even finger-walk past it a ways, but then will rush back to find its friend the other hand, and give it a great big hug! We've also played, "A bear is coming," in which we hide under the dining room table and plan what to do in case the bear comes, mostly involving stocking up on fish and strawberries to distract it. I also saw Vanessa helping her toys have a conversation yesterday. The sheep asked the horse, "How are you doing?" And the horse said, "Fine."

Vanessa's reading has been really taking off. She read through the first 35 pages of "Little Black, a Pony" all by herself, with an average of four or five sentences on a page. It's apparent now that she knows how to sound out unfamiliar words. She's also been practicing playing piano, and can find the notes on the piano by letter name. She plays a lot of original "songs."

Sometimes it seems Vanessa is growing up almost too fast! But at least she isn't too old for peekaboo. Today I played peekaboo with Elizabeth and Vanessa while they hid together under the same fuzzy blue blanket. Ah, it was heaven to hear both of their giggles at the same time when I found them both! 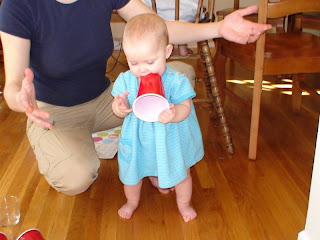 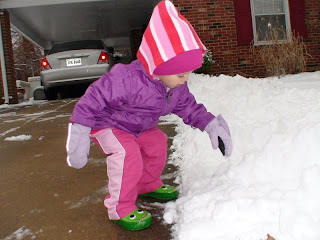 Vanessa plays with the snow when it first fell. It was soft and fluffy. Vanessa hasn't really had a chance to touch or play in the snow before (outside of one exciting snowball-throw with Nana, and a few experiences from her babyhood). Elizabeth was napping and missed out on our brief jaunt in the snow (thanks to the baby monitor, she could stay inside). 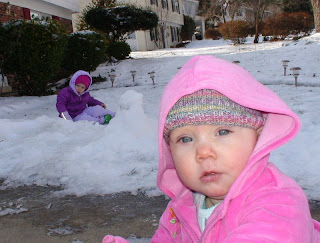 Today, though, the snow just wasn't as fun. Everything was iced over, and Vanessa wasn't able to keep her footing very easily. Elizabeth's first experience in the snow wasn't too exciting for her, I guess. 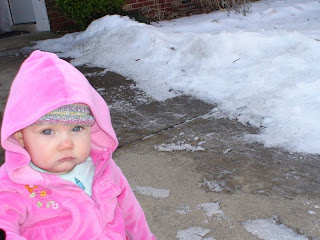 Can we go back in now Mom? 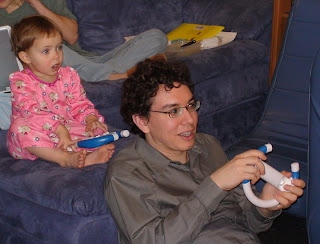 So I'm not too sure how I feel about Vanessa watching or "playing" Mario Kart, and way past her bedtime at that, but... Vanessa's friend Dean being over makes for a very special exception! 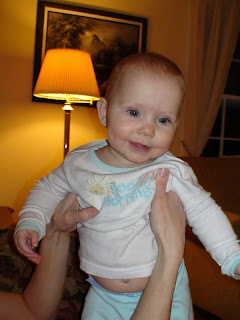 This one is just because Elizabeth is so cute! 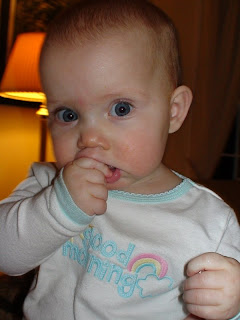 And even cuter in close-up! 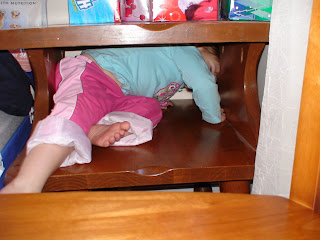 Vanessa has enjoyed looking back through the blog to see stories of when she was little. Here she is trying to recreate the picture when she was just learning to climb into furniture. http://www.maxtedfamily.com/2007/12/last-chance-for-me-to-post-before.html But now she's too big to turn around like she used to! 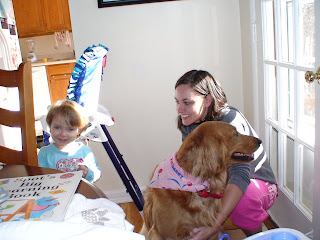 I had just a few more pictures from another visit from Joanna, Brian, and Kyra. My favorite part about this recent trip was Vanessa discovering that Joanna was as many years old as Vanessa is months, a discovery that prompted a great big hug from Vanessa! Vanessa has been working hard on saying Joanna since then. It comes out "Jo-Nana." 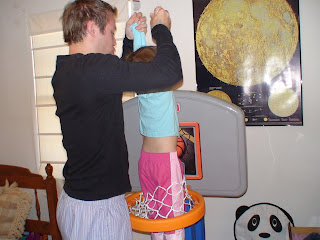 Brian uses Vanessa as a basketball! Needless to say, this resulted in a resounding, "Again!" 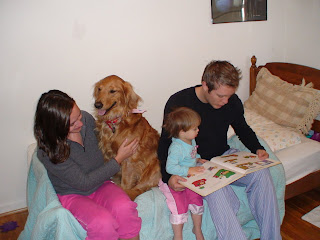 Storytime! Vanessa had spent all her time with Kyra trying to convince Kyra that it was OK to climb up on Vanessa's bed. All it took was Joanna sitting there!
We also had a terrific time with Aunt Heather, Uncle Terry, and Uncle Zak this past weekend. It's always such a nice break for me to have that crew around, because they do such a good job of entertaining the girls and wearing them out!

Yesterday while I watched, Elizabeth pulled herself from a sitting position to a belly flop on top of the bathroom stool, and then pushed herself back up into a standing position. Whoa, was I surprised. I have to stop leaving her in a sitting position near ANYTHING. I lowered the crib just in case we have a sudden understanding of how climbing works.

If the increasing difficulty of keeping Elizabeth on her changing pad while giving her a diaper change is any indication, I think we're going to see some crawling in the next week or so.

Vanessa usually calls Elizabeth by the name Libbiff, Yibbiff, or sometimes even Biff. I think I heard her say Eyibbiff today, though. I wonder if Elizabeth will ever call herself Biff? I don't think I would have guessed that Vanessa would have called herself Sessa, although now of course she calls herself Vanessa.

Elizabeth's first two teeth have finally broken through! We had our first tooth-brushing yesterday. I'm glad they're finally here, maybe now she'll get over her cough! And now she's a pro at chewing her finger food. 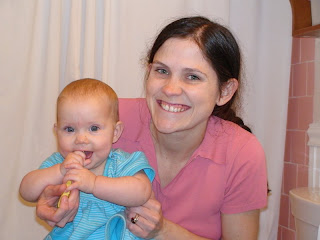 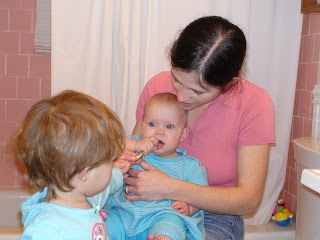 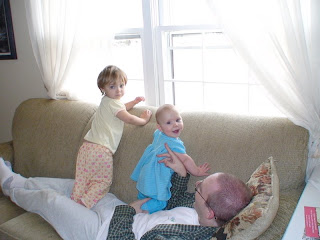 Elizabeth is getting so good at standing. She's even been balancing for a few seconds. Today after balancing she stepped forward with one foot before I caught her. A first step? And she's sort of cruising even. Not crawling yet, though. 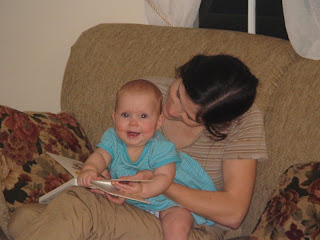 Elizabeth has just started enjoying books a little. She especially likes playing peek-a-boo in Pat the Bunny. But that's not a surprise really, she LOVES playing peek-a-boo. Well, her uncle Brian made her cry playing peek-a-boo once, haha! ...but that was after making her smile and laugh for ten minutes!
Posted by Sarah at 8:35 PM 1 comment: