James here posting as Sarah. We've had a VERY busy couple of weeks, hence the delay in posting pictures. So first off, Vanessa is now 2 years old. At her 2 year old check-up, she was 27 lbs 2 ozs and 34.5 inches tall. Elizabeth is doing great and loves to be held facing outward and standing. We're going to have to start watching her more closely as she's really close to turning over in her crib. 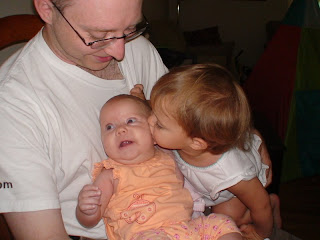 Have we mentioned that Elizabeth is smiling a lot now and Vanessa LOVES her sister? Pretty much everytime Vanessa sees someone holding Elizabeth she has to run over, give her a hug, a kiss, and pat her tummy. 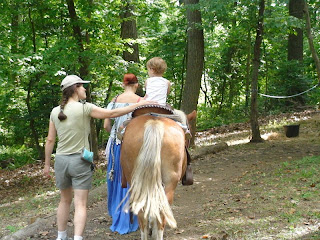 A couple of weekends ago we went to the Maryland Renaissance Fair. I can't believe I got through 4 years of a nerd school like TJ without going, but we had a great time and ate lots of great food. Vanessa was very excited about riding a pony. 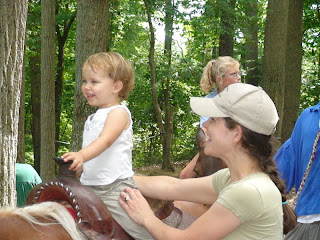 I think she enjoyed it, what do you think? 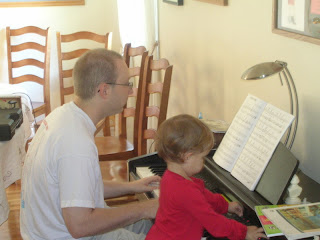 Lately Vanessa has been requesting that Daddy play and sing songs with her. She doesn't have a good enough ear yet to hear how nasally I sound, but for the time being it's a lot of fun. 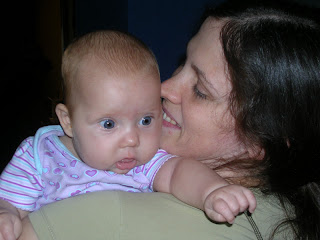 We spend a lot of time trying to capture Elizabeth smiling. She loves her Mommy very much, but always wants to make sure she's seeing what is going on. 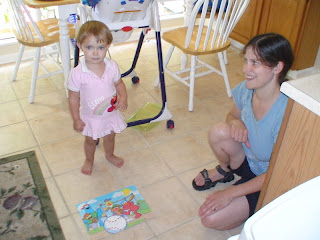 We bought a Sesame Street puzzle for Vanessa seeing what she would do with it. It says it was for 3 and up, but that didn't stop her from putting it together. ;) 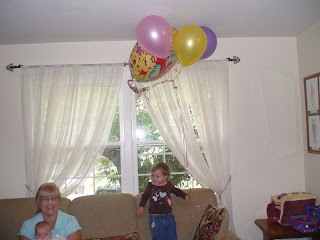 We had Vanessa's 2 year birthday party on the day before. She had lots of guests over. One of her favorite presents was this Elmo balloon that Nana bought for her. When ever you hit it, you hear Elmo sing Happy Birthday. Vanessa set it off at least 10 times on her birthday. We didn't have the heart to take it away from her then, but I don't ever want to hear that Elmo song again. ;) 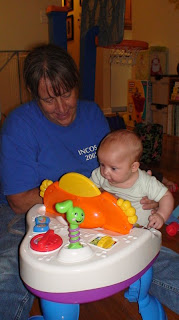 Grandma came over for Vanessa's birthday and helped Elizabeth play the piano for the first time. I like the potential for musicians in this family. 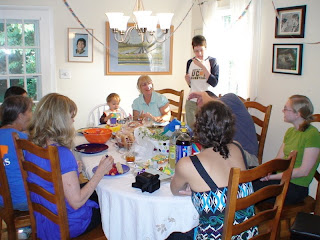 Here's a picture of all the people at the party. My poor friend Johnny was the only male represented here. I think he's telling a story about Vanessa and his dog Riley. 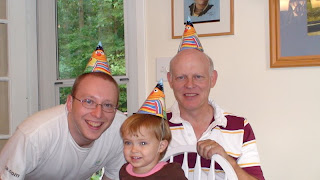 Grandpa's birthday was August 29th, Vanessa's the 31st, and mine on September 2nd. Vanessa insisted that she wear a party hat and that the other two birthday boys wear hats too. What a great picture! 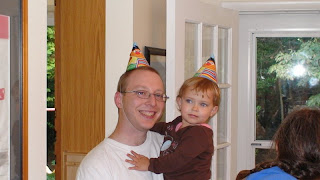 Daddy loves his little girl so much. Of course, now that she's two, she's a big girl. 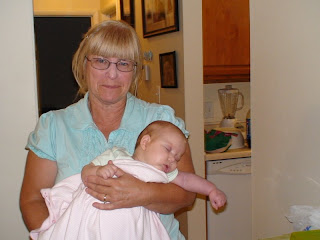 Nana enjoyed rocking Elizabeth to sleep during the party. 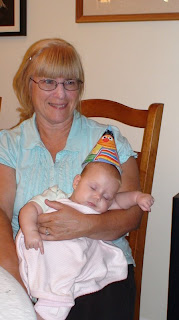 Elizabeth did wear a hat for a little bit, granted, she was asleep. 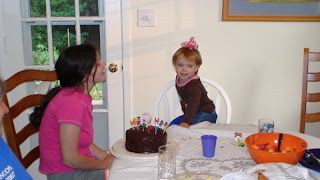 Vanessa decided to put a bow on her head for an alternative hat. 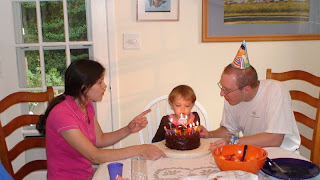 Vanessa wasn't quite sure what to do with all the candles. Her parents helped her out a little bit. 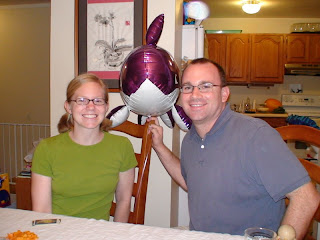 Johnny and Liz decided that bringing Riley to the party would have been a bit of a distraction, so they brought the next best thing, a giant whale balloon. Vanessa was giving the whale hugs throughout the party. 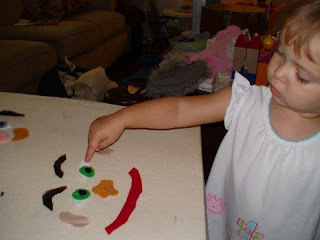 Vanessa's Grandma (Sarah's Mom) brought a felt board with felt face pieces to assemble. Vanessa was very particular about where things should go. 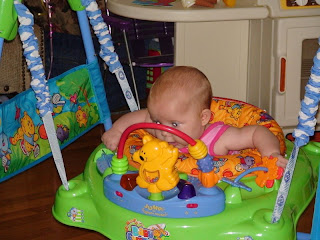 We resurrected the baby bouncer for Elizabeth. She seems to like it pretty well, though she'll eventually get bored and start to eat it. Vanessa tells us that she isn't too big and that she fits too. Of course when Vanessa sits in the bouncer it almost sags to the floor. 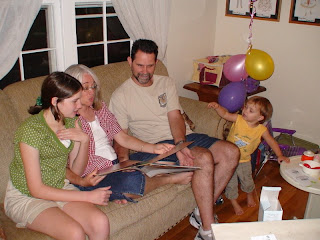 The Kaylors came on Vanessa's birthday to hang out on Labor Day weekend. Here Hannah, Grandma K., and Grandpa K. read a book to Vanessa. 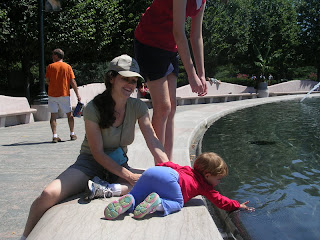 The next day the lot of them went down to DC while I got a break to play games with my work buddies. Here Vanessa demonstrates that she can reach the water in the fountain at the Sculpture Garden. 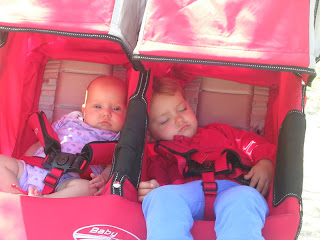 Vanessa seemed to have enjoyed it. But Elizabeth is awake.... 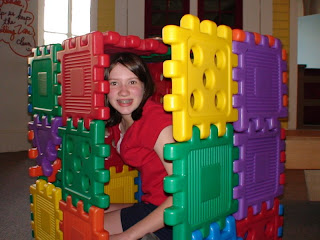 Aunt Hannah got built into a set of waffle bricks at the Building Museum in DC. 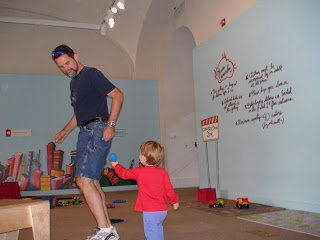 Vanessa really enjoyed the wide open spaces of the Building Musuem to play and run around. Of course I'm not sure what message we're sending as parents when we let Vanessa chase her Grandpa around with a toy drill gun... 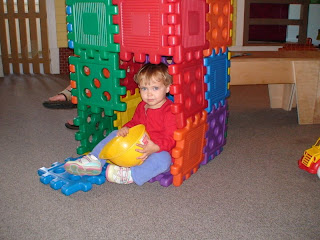 Vanessa decided to assume ownership of the Waffle House for awhile. 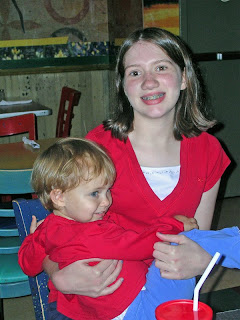 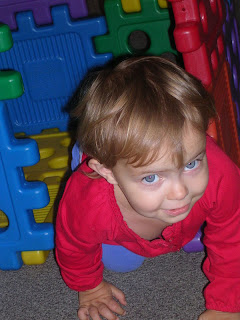 One last action shot of our little "big" girl.
Posted by Sarah at 7:50 PM