Woohoo! I managed to post about Thanksgiving before Christmas is upon us!

Thanksgiving was just as it should be this year, full of lots of friends and family. We even got an early start on Thanksgiving, celebrating with my Mom and Heather and Terry and Zak on the weekend just prior to Thanksgiving. 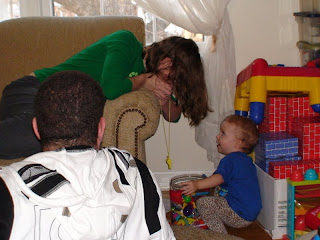 Aunt Heather has many talents, but one of my favorites is making my girls laugh! Elizabeth loved playing peekaboo through Heather's hair. 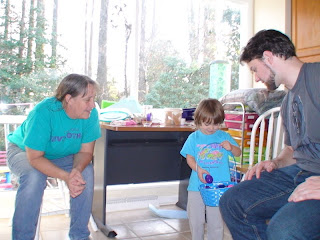 Thanksgiving can be a bit of a nondisjunction of holidays, because it tends to be the beginning of the Christmas season as well as a holiday in itself. Vanessa decides to add Easter into the mix, by discovering her egg basket and pulling it out its storage place. 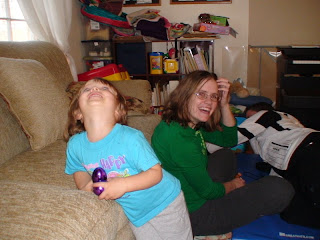 Now it's time for Aunt Heather to give Vanessa the giggles! 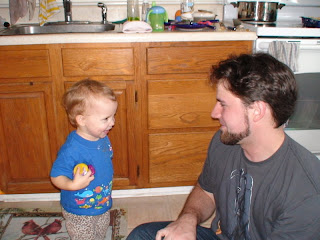 And Uncle Zak gets some good goofy giggles from Elizabeth too! 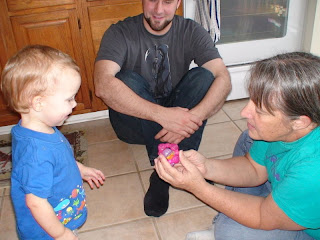 Grandma gets a big Elizabeth grin with a rubber ducky toy. 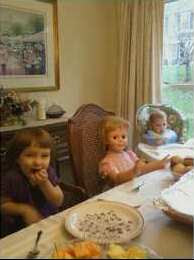 Ah, this picture is mostly to remind myself to bring a CAMERA to Thanksgiving, for Pete's sake. This picture was taken with my phone, alas, the resolution is not so great. On Thanksgiving Day, we joined James's parents and Brian and Joanna (and their dog Kyra and new dog Winston) for our big meal. Oh, and if you are wondering who Vanessa invited to the table (and carried all the way down the stairs and into the dining room), that's Nana's doll from when she was little! Just after Thanksgiving, it was time to put up the Christmas tree. I don't think Daddy could have done it half as quickly without help from his little elves. 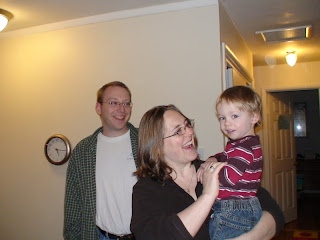 We were so fortunate to have a visit from our friends Janet, Ryan, Peter, and new baby Evan. I tried to take some pics of Ryan and Evan, but the red-eye was beyond touching up. But this picture of Janet and Peter is very cute, isn't it? Peter and Evan are such little sweethearts. 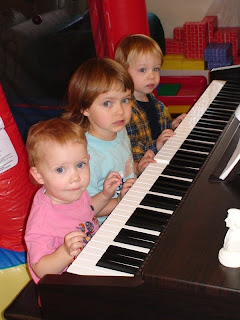 Can you believe that they were sharing a turn on the piano for a few minutes? See, I told you Peter is a sweetheart. 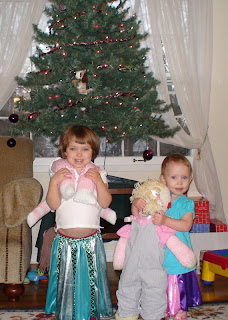 I was a week or two late with my every-three-months-with-special-doll pictures. Well, here is Vanessa at three years and three months, and Elizabeth at 18 months with their special dolls from Grammy Dee. 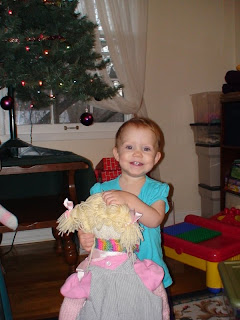 Elizabeth just had her 18 month appointment today. (Again a little late, but just you wait, I'm going to be much more prompt about things now that I won't be taking classes until the fall!) She weighed 23 pounds 10 ounces and she was 32 inches tall. She had an ear infection so she was given a short reprieve from her shots. For Vanessa on the other hand, our trip was a bit of a dis-appointment -- I decided to let her have the H1N1 vaccine. Ouch!

Elizabeth is doing just great developmentally -- I think my favorite skill of hers is singing, because I think she has a better memory for tune than I do, and a pretty good memory for lyrics too! The other day when I sang "Frere jacques, frere jacques" for the first time to her, Elizabeth sang out the next line "Here I am" from "Where is Thumb-kin?," which shares the same melody. And she has a good visual memory too -- when she saw the word "National" today, she pointed and said "Nana," because it starts with the same letters, I guess. 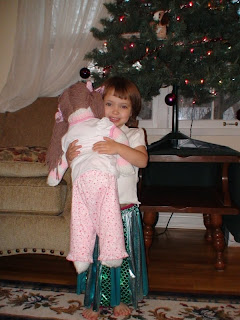 Vanessa's new skills include being able to write letters in small spaces (she was practicing putting a few of the simpler letters inside the squares on a crossword puzzle), and writing her name and a few other words. She's finally breaking out of her "must only color with purple" phase, and just in time, because our purple paint is almost gone and our purple markers are exhausted. Vanessa has been working on her enunciation -- she can say her hard G and K sounds now and is better about her double consonants in words like "spoon" and "school."

Vanessa can now enter a password and log in to an account that James set up for her on our laptop, change her account picture icon, open up MS Paint and do some drawings, open up MS Word and type some names, and log off. She calls this "checking her email." Ah, Vanessa, how dangerous you will be soon... 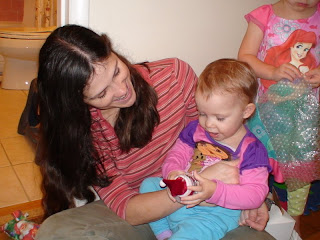 The girls' great-grandmother Grandma Lou sent some light-up snowman ornaments for the Christmas tree. Elizabeth and Vanessa were both excited the minute they opened the package, and that was only just because they found the bubble wrap... they could hardly believe their luck when they discovered that there were also ornaments inside! 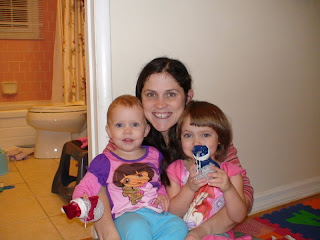 Now how does Grandma Lou know that red is Elizabeth's favorite color and Vanessa loves blue and purple best? I guess grandmas just make that kind of stuff their business. 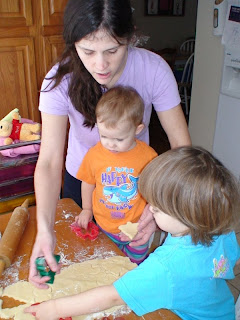 After trying to make sugar cookies at a friend's house with some success, I thought I would try it out at home as one of our snowed-in activities. Only now with practice, Elizabeth and Vanessa were even faster with cutting out the cookies and even trickier to keep up with. I'll get ahead of you girls one of these years, just you wait... 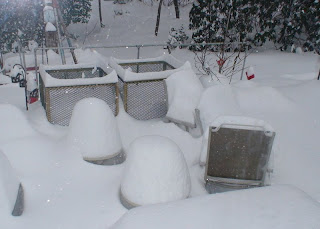 Here is one picture of some of the snow that fell on our back yard this Saturday. Snow was still falling, and I think about 3 more inches of snow fell than is pictured here. I like this picture because it shows the lovely snow gumdrops that our little round backyard tables made! Right now I can hear the plow going past in our street, three days after all of this. I'm very thankful that we and everyone we know is safe and not stuck anywhere because of all this snow. Instead, it just makes for outdoor fun! The girls and I plan to attempt a snowman tomorrow. We'll see if we make it into our snow clothes and outside before someone needs to use the potty...
Posted by Sarah at 10:24 PM

You're a true superwoman- how do you manage to fit blogging into your super busy schedule? It's totally worth it for those like me who live too far away to see your cuties often. They are growing so fast! I just love seeing how many things they are mastering and enjoying! Looking forward to seeing everyone in the spring. Perhaps we need another reunion at Dean's parents house!

And how do you have time to leave posts on other people's blogs, with all your blogging, and WORKING and taking care of a new house and Sam at a running speed now? Good grief, you know I bow in your direction, amazing mommy!