A week at Nana's and meeting new friends

James spent last week in L.A., so I decided to spend the week at Nana's and Grampa's place. Vanessa enjoyed the week very much, making the dog jealous with all the attention she was getting from Nana and Grampa and me! Nana took a few hours off from work on Thursday to spend even more time holding and playing with Vanessa. Daddy knew that there would be some new trick of Vanessa's that she would learn while he was gone, and sure enough, Vanessa has learned to focus on objects other than people's faces (i.e. toys). How exciting! (Grampa tried to teach Vanessa the trick of using the remote, but that didn't work quite yet, thank goodness).

This week was also notable because on voting day, I met a new stay-at-home mommy with a baby, Revie, just 3 weeks younger than Vanessa. They live in our neighborhood, and they seem to have quite a bit in common with us. For example, they like to play the Settlers game that James and I like, so we played that game last night. I'm really excited to have new friends!

Plus, I was also happy to have Heather and Terry come to visit us again. Vanessa and I are truly spoiled to have an aunt and uncle so close by. They came in Halloween costumes, since it was only a few days after Halloween, and the costumes were so fun and cleverly put together by Heather (with a little help from Terry, I understand). Heather and Terry were impressed by Vanessa's standing and SO BIG trick. When Vanessa plays SO BIG, she pulls herself into a sitting position with just a little help. It's so funny -- she'll do this trick even if she's very tired or fussy. 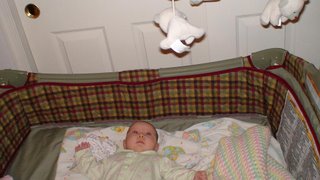 Vanessa noticing the mobile for the first time at Nana's house. 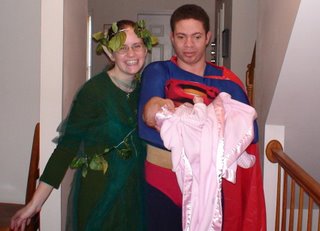 Aunt Heather and Uncle Terry with Vanessa. Or, you could interpret this as Superman returning the wood-elf's precious niece after saving her from certain disaster. 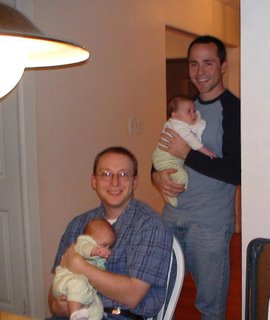 The boys and their babes. Jeff and Revie, James and Vanessa. 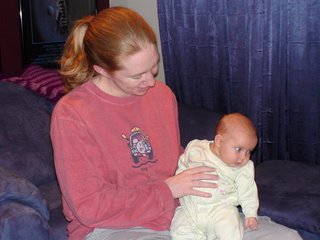 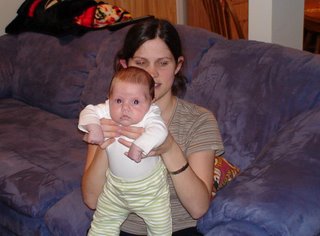 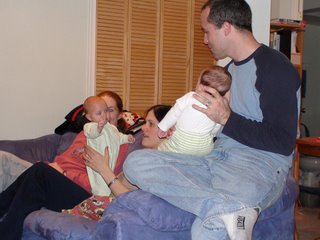 Vanessa shows off her standing talents. 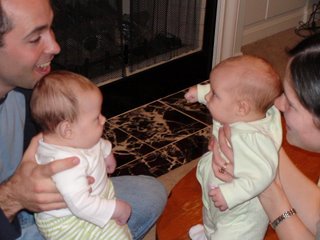