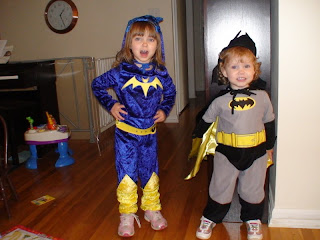 I realized that I hadn't posted any pictures of Halloween on the blog (I think I was just lazy and posted them on Facebook instead). So here are our heroic caped avengers from Halloween! 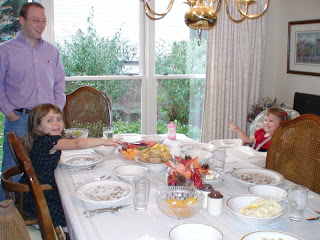 And, so fast forward a month to Thanksgiving. The girls were very excited about the food. Mostly all the fruit! Yummy! 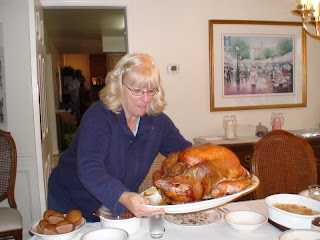 Here comes Nana with the big turkey. I have to admit, the turkey was pretty tasty. 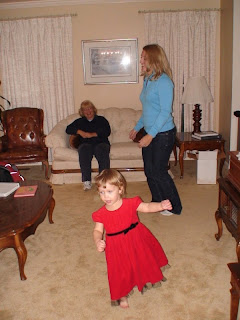 Elizabeth loves all the open spaces in Nana and Grampa's house for dancing. Plus she had her Aunt Kalena to dance with her! 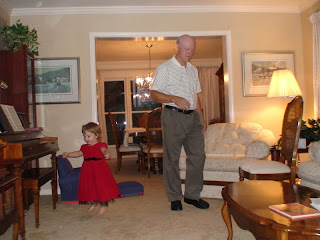 I can't remember if Grandpa was actually dancing with Elizabeth in this shot, or if he was just passing through. I'll assume that he was really dancing because that's a better story! 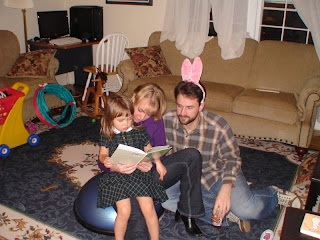 Zak and Mary came to visit our house around Thanksgiving time. Zak is wearing those bunny ears so he can hear the story better, I think. 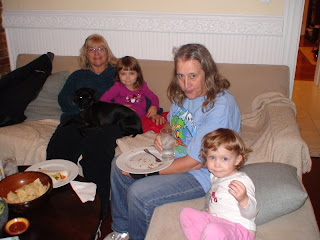 On the day after Thanksgiving, we visited Brian and Joanna's house for a night of tacos and family togetherness. Here are both our daughters and both our moms. And Winston, of course! I love how the girls have both warmed up to dogs again (they were a bit shy there for a while). 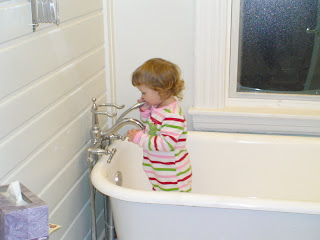 Elizabeth pretends to talk to the shower head. She kept fiddling with the knobs -- I half expected her to give herself a bath or a shower any minute, but she just had a blast playing in the dry tub instead. 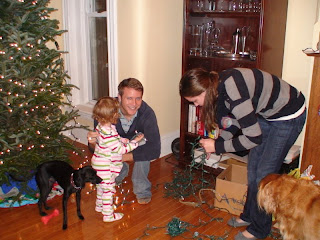 The girls helped with the Christmas lights... 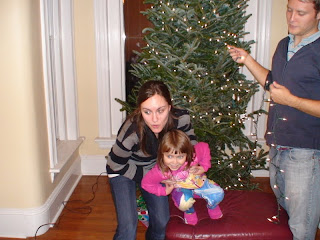 Did a little jumping in there just for fun... 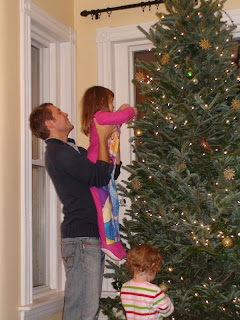 And helped with the ornaments too. 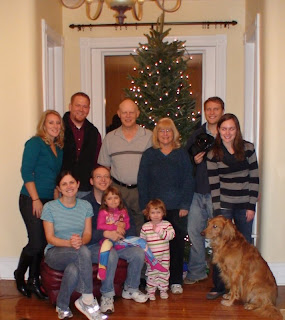 Here's a Maxted family portrait. It's great to be a part of this family! 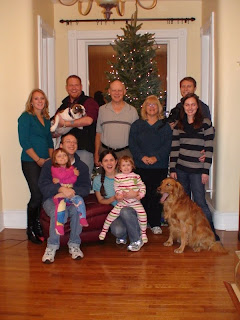 Here's one with Callie in there too (in Uncle John's arms). 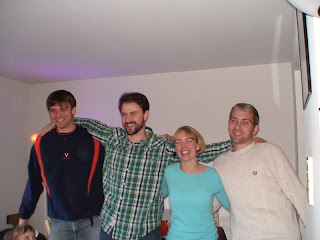 We visited Zak's house that following weekend. Zak and Mary and a couple of Zak's roommates (and Vanessa too, in the bottom left, sorry to cut you off a bit sweetie!) were singing after UVA managed to score something on Virgina Tech (in an otherwise VT-dominated game). 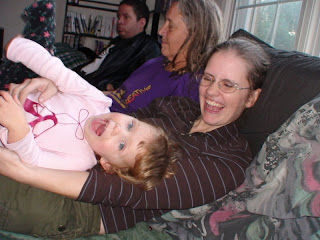 Aunt Heather and Elizabeth share a goofy moment! All of us went ice skating that day. Elizabeth fell down and wasn't too happy, but afterwards was proud of how far she went and said she wanted to go again soon, and Vanessa stayed on her feet and had a great time. It was cold but I think the adults all had a pretty good time too! We had dinner out at a really cool and fairly fancy (fancy=no explicit kids menu) little restaurant where my children actually ate their food and had fun! AND I liked the food (especially the dessert). Win-win. 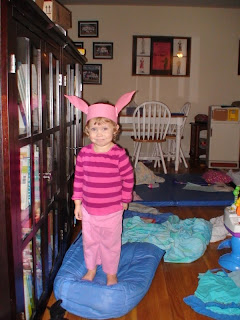 Elizabeth wanted to dress up like Piglet from Winnie the Pooh, so I cut some paper ears for her. She's been having fun with that lately. Meanwhile Vanessa has been dressing up like a cowgirl (but it is a little more tricky to get that one to hold still for a picture these days). 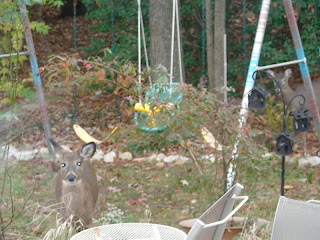 Well, we have had some uninvited visitors lately! These two deer and two others have pretty much made our backyard their home lately, in spite of James or I periodically chasing after them, waving our arms, and howling like coyotes. (Maybe they're just staying for the entertainment, now that I think about it). 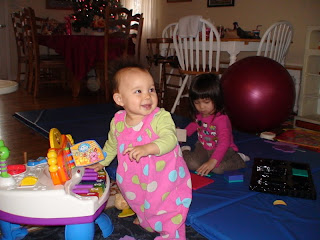 Now for some very, very welcome visitors! Adalyn and Aryana stopped by for a little play time not too long ago. I can't believe how much they have grown since last I saw them! They're both getting so strong, so bright, so beautiful, and so much fun! Plus it was just great to see my friends Sara and Lee too. 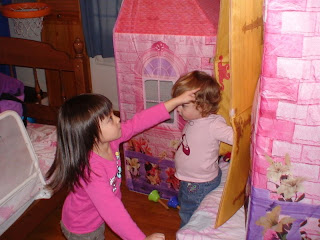 Aryana checks out the castle which we had put on Elizabeth's bed. They all tried to pretend to sleep in it at once but it was a tight squeeze. We can't wait to see Adalyn and Aryana at their new house on our trip next summer. 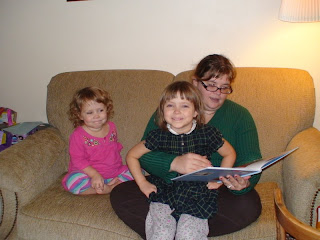 Last week, we had Mollie and Fred visit for a while. Mollie and Fred were so helpful to entertain and babysit the girls off and on so for a few days I could rake, tutor, and even go grocery shopping all unencumbered! The girls and I all had great fun with Mollie and Fred. 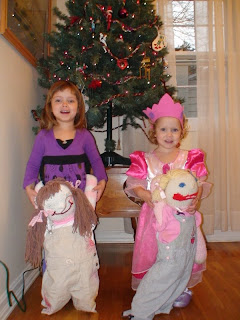 Here are the girls with their Ms. Dee dolls. Vanessa is now 4 and 1 fourth and Elizabeth is 2 and a half (as either of them would proudly tell you). Elizabeth is wearing the princess costume that she has completely fallen in love with (to the point that she will put off eating meals just so she can wear it a little bit longer). The girls insisted getting their picture taken in front of the Christmas tree because they knew that they had had their picture taken in front of the tree for their corresponding Ms. Dee doll picture last year. Over the past three months, I'd say that one of the girls' greatest achievements has been greater independence and cooperation in getting ready in the morning. Yes!!!
Posted by Sarah at 10:04 PM