Two weeks on the move

This week were are back in town after stops in Maryland, New Jersey, Delaware, and Pennsylvania. The girls had a little more trouble getting to sleep than usual because of all the excitement, but when they did sleep, they slept in a cuddly pile like a couple of puppies. 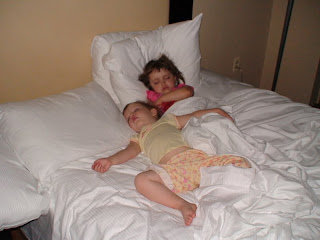 Here are the girls sleeping in the hotel where James had his conference in Baltimore. 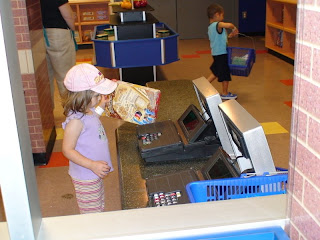 The first day in Baltimore, I took the girls to the Children's museum. The girls liked the mock-up grocery store area best. Vanessa got to choose all the cereals I don't let her choose at home... 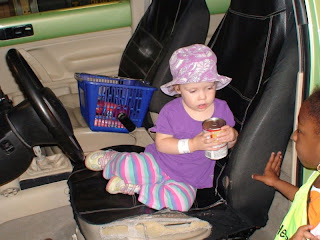 Elizabeth took her groceries to the nearby exhibit wherein children could pretend to drive a car. I guess she wanted to pretend she was taking her groceries home. She's clutching a can of baked beans (she loves all kinds of beans!) 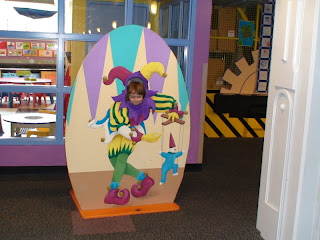 Vanessa knew just what to do with this jester cut-out. Behind her was a craft room where the girls played with some paint and glue later on. 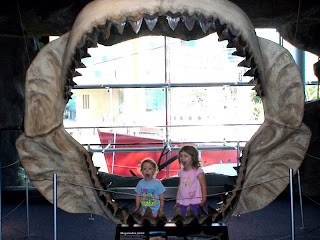 But of course we went to the aquarium! This Megladon jaw never ceases to amaze me. Elizabeth seemed to like the ray and shark exhibits best. Vanessa definitely loved the dolphin show the best. Some of the other highlights were crocodiles, a frilled lizard, rainbow lorikeets, and a golden lion tamarin. 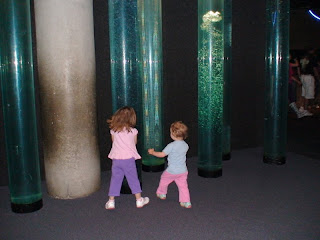 And the bubbles! These towers of bubbles are an endless source of wonder for them! 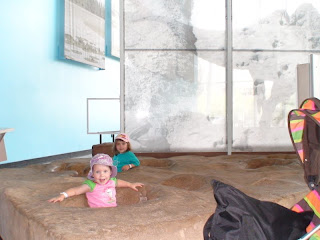 I am glad that we were in Baltimore long enough to give us an excuse to check out the science museum. It was definitely worth it! I liked it about as much as the aquarium, especially because it had such great exhibits for little kids. Here, Vanessa and Elizabeth get cozy in some dinosaur footprints. 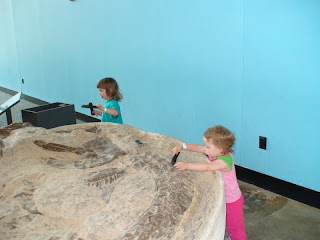 The girls loved unearthing this dinosaur fossil. There was also a pretty cool three-dimensional skeleton of another dinosaur that they could put together like a puzzle. 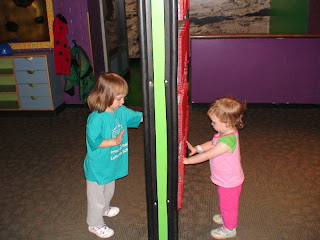 The little kids area of the science museum has a really great pin board right at the beginning. The girls would have been content to play with it the whole time, I think! Except for the fact that there was an amazing water table area (I didn't get out my camera for fear of drenching it). The water table had pipes and fountains and a stream with moveable dams. Plus there were legos, trains, and rooms of a model ship and submarine to climb inside. I think we could have stayed in the little kids' area all day if we didn't have to break for food! 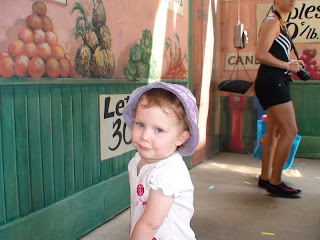 Next after Baltimore was our trip to New Jersey to see our fabulous grown-up friend Vanessa and her family. Not long after we arrived, we took a trip to Sesame Place just a little ways into Pennsylvania. I think Elizabeth was feeling a bit under the weather, because she seemed like she might be ready for a nap (which she rarely takes these days). But she absolutely loved this pretend store in the Sesame Street Neighborhood area. It had painted-on food and signs -- nothing real to put in any baskets like at the children's museum in Baltimore, but I think she liked it even better! 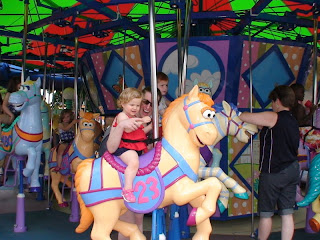 Here are Vanessa and her toddler Samantha. It was so cool to see my girls playing with Samantha -- they ran around the house and had just a fantastic time. 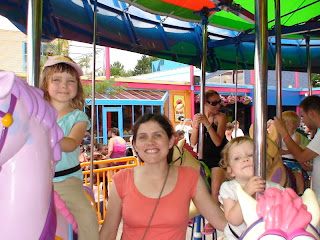 Elizabeth and Vanessa really loved the carousel too!

The day after we visited Sesame Place, Elizabeth was acting kind of sick, so we decided to head back home. It was definitely hard for us to say good-bye. After a day or so, though, she seemed fine, so I decided to continue on with the next part of the trip we planned -- to Princess Anne, Maryland, to visit their Grandma's house for the first time.

I decided to visit my friend Sara whom I'd really been missing, because she was vacationing in Delaware just an hour or so from my mother's house. I had the idea of going to the beach, which I think would have been a perfect idea, except for the wind... oh, and except for Vanessa spending a good portion of the time going back and forth to the potty. As it was, it was still cool to see the girls dipping their toes in the water, building sand castles, and finding interesting things in the sand. 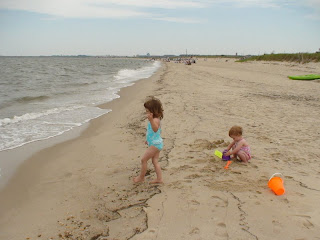 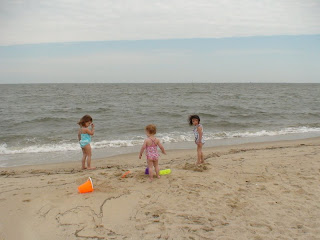 Here are Vanessa and Elizabeth with Aryana. They were pretty patient with my beach idea, but they had a really much better time back at the house! There, they played with toys, read books, and giggled together. 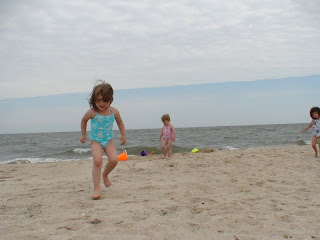 The girls were all jumping up and down in the sand in this picture (well, Elizabeth hasn't quite learned how to jump yet). 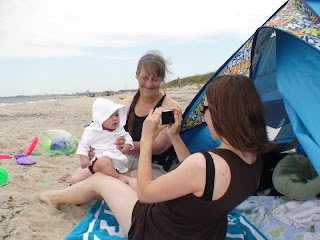 Here's a picture of my friend Sara taking a picture of Adalyn. Adalyn truly is such a beautiful baby! I can't wait to see Sara and her remarkable family again soon! 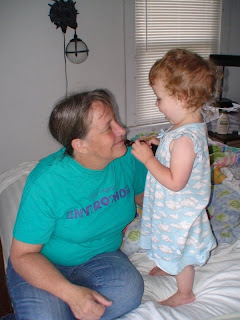 Here is a picture of Elizabeth and her Grandma. Elizabeth loved Grandma's hair, and immediately decided to use the end of her braid as a paintbrush to paint Grandma's head "pink." 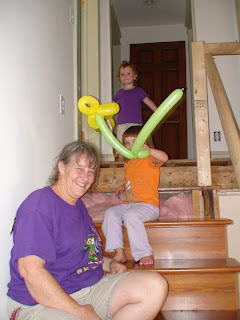 Grandma made lots of balloon animals for the girls to play with. Vanessa decided that this balloon flower made an excellent Grandma-bopping toy. Ah, well, I guess my kids show their affection in strange ways.
Grandma took the girls swimming and to lots of playgrounds. They also really enjoyed their hike through the cypress swamp!
I'm so glad we've had so many opportunities to spend time with people who are so important to us. It's been a busy June, and it's not over yet!
Posted by Sarah at 9:28 PM