Since Valentine's Day, the snow has begun to melt and we've been sick less of the time, but we have still spent a considerable amount of time inside waiting for spring! The girls have responded with a lot of dressing up. Some days, the dressing up game lasts almost all day. 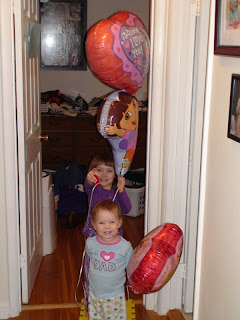 Here are the girls with their Valentine's Day balloons from Daddy. 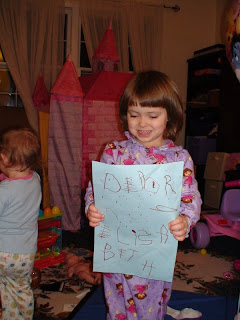 My brother Jake taught me a cool trick of writing notes to kids when trying to convey especially difficult emotions to kids. I use notes occasionally when I'm feeling frustrated, but mostly if I'm feeling very proud of them for doing a great job. I usually put them in an envelope with a pretend stamp. Vanessa did a pretty good job at trying to write a note of her own for Elizabeth. 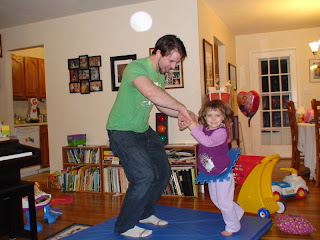 When the snow finally stopped enough for us to have a visit, Uncle Zak visited with his girlfriend Mary. In the eyes of our little ones, Zak = fun. If you're wondering, Vanessa is wearing part of the number mat as a tutu. 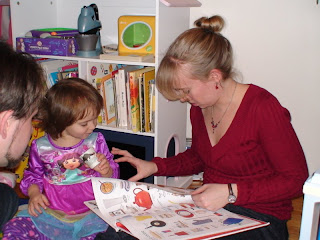 Vanessa loved learning some Spanish words with Zak and Mary. Vanessa forgot her shyness and warmed up to Mary with record speed. 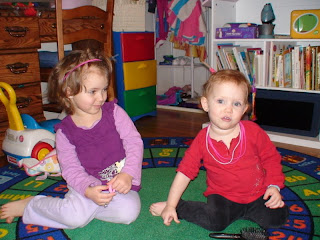 OK, now on to dressing up! The girls have had oodles of fun with the purse of jewelry and hair ties that Aunt Hannah gave us. The adhesive rhinestone earrings actually last for days -- they're quite durable. 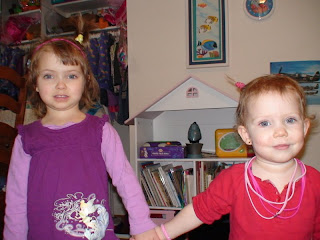 Here's a close-up of their weird little pony tails sticking straight up. One of these days they'll have longer hair that's easier to work with (a mother that knows how to do hair would probably help too). 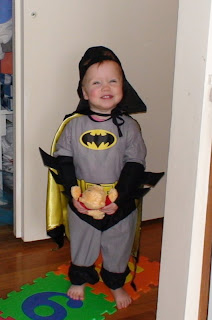 If I've talked to you recently, I've probably mentioned that Elizabeth is obsessed with Batman. You know I'd like to claim full responsibility for her gaining this obsession, but believe it or not, there's someone else who has been instrumental in developing this love of the caped crusader... But the bottom line is, she LOVES to play with the little Batman action figures we have and she thinks that the sole purpose of a laptop is to play the theme to the 60's Batman show, as well as several other superhero jingles from that era. Vanessa likes Batgirl best because Batgirl wears purple, so we got her a Batgirl costume, but she won't let me take a picture of her in her new costume yet. We don't have a Batgirl action figure, so Vanessa improvises by playing with the Batman action figure, saying "he's changing into Batgirl." 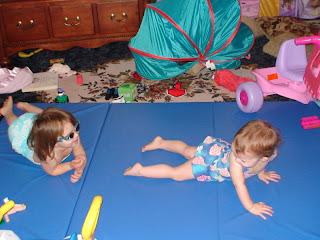 Other costumes that have been popular this week include the swimsuits. Vanessa and Elizabeth have spent a lot of time jumping into the "pool" that is actually our exercise mat. Oh boy are these girls ready for warmer weather! 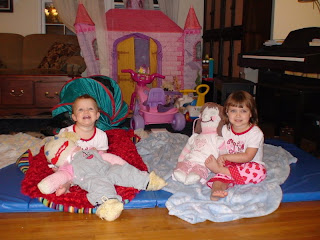 Elizabeth is 21 months old now, and Vanessa is officially 3 and a half. Every three months, I try to take a picture of them with their special Dee dolls. At 21 months, Elizabeth can count to ten and recognize several words without context -- no, yes, up, my, boots, boo, and many names, maybe including yours! The girls insists on my writing the names of their friends and family on the sides of every box of Kix that we open. That way they can look at the names of the people they care about every day. Elizabeth can climb up into her booster chair and buckle herself, and climb from the ground into her car seat. She can dress and undress herself with very little help. Vanessa at 3 and a half can defeat the child safety door knob covers (that didn't take long), repeat patterns of 3 or 4 notes that someone else plays on the piano, tie the knot on her shoe (but not the bow), and follow simple written directions. Both girls are also really great at singing, making messes, and getting into trouble. :) 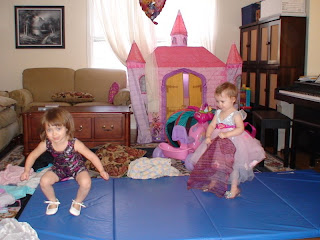 Ballet time! Vanessa and Elizabeth are already anticipating the ballet class I promised we would enroll them in this summer, when their ages align such that they can take a 2-3 year-old class together. So, they've been practicing their moves and making sure their ballet clothes still fit! 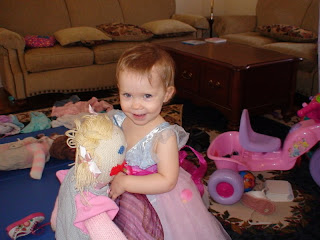 Here's another picture of Elizabeth with her Dee-Dee doll. 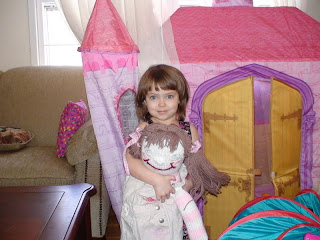 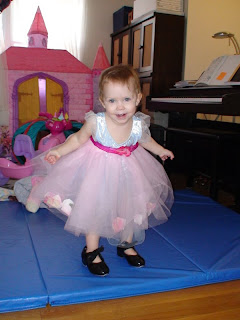 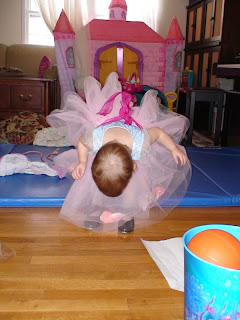