Finally posting about our visit from Jake and company!

We had such a wonderful weekend a few weekends ago when my brother Jake brought a party to our house from Texas! Jake brought his three daughters, my amazing nieces Katelyn, Jadyn, and Bryn. He also brought his lovely mother-in-law Judy. We were excited to meet Jake's girlfriend Heidi and her son Timothy.

I'm already a bit late on my posting pictures from their visit (and I have a bunch of new pictures to post since then), but first a few pictures I had meant to post even earlier! 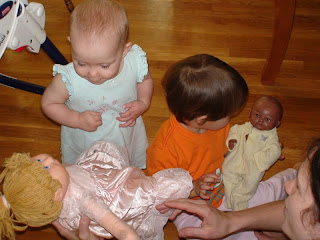 I decided that now Elizabeth wants EVERYTHING she sees Vanessa holding, it was time to get out a doll for her. I had two dolls from when I was very young that I still own. One of them is the little doll that Vanessa is holding, that Vanessa named Chloe after her own middle name. The other one my Aunt Suzanne named Jessica when she gave it to me when I was tiny. My Aunt Suzanne always loved the name Jessica, and later named my cousin Jessica. Now the name Jessica has even more meaning to me, and somehow that makes this doll have even more meaning. Elizabeth likes her new doll, and can find the doll's eyes, ears, and hair if you ask. Elizabeth is also able to point out some features on herself -- not eyes, but ears, teeth, tongue, head, and hair. 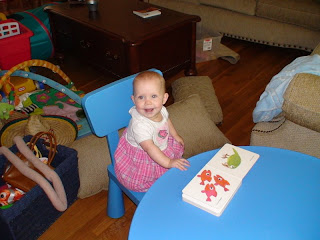 Elizabeth spends a good portion of her day looking at books now. The book in this picture is "A Color of His Own" by Leo Lionni, one of her favorites. Just in the past few days, if I start reading a book to Vanessa, Elizabeth will pick up one of her own books and fuss to try to get in my lap. She points at pictures in the books and can even make a few signs like "dog" to show that she understands what she sees. Often when she sees letters or written words, she makes a "w" sound, because I once showed her a written "w" in a book and made the sound for it. 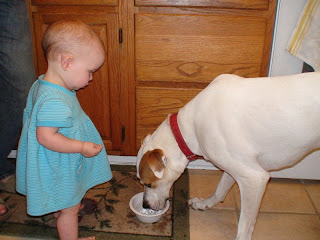 Elizabeth loves Riley! John and Liz know the way to our girls' hearts -- bring a lovable dog to our house to visit! 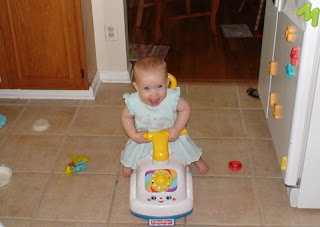 Elizabeth has been climbing on everything lately. And she's becoming a pro on her ride-on car. I'm pretty sure part of the appeal of climbing and riding things is how much attention I give her when she is doing something a little dangerous, just so I can help keep her from getting hurt... 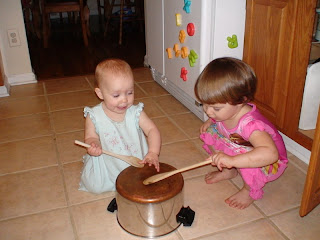 And when danger isn't getting my attention, loud noises work pretty well too. In addition to drumming, Vanessa has been singing so much lately! She especially likes to sing "Once upon a dream" from Sleeping Beauty. Oh, and she has just learned how to hop on one foot. 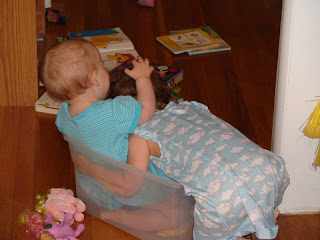 Just thought I'd post a picture of a spontaneous hug! 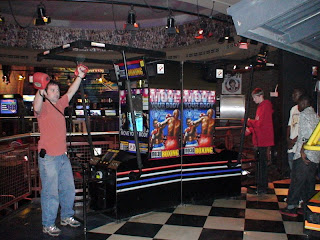 OK, now for the pictures from our weekend with Jake and his crew. I thought I'd open with Jake's boxing celebration pose! This picture is from our visit to the ESPN Zone in Baltimore on that Saturday. Timothy is boxing on the other side. 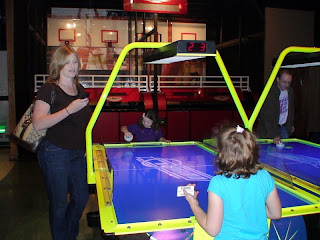 I thought it was great fun to watch Jadyn and Bryn playing air hockey. They did a pretty good job of it! Heidi stood at mid-court for those pucks that didn't quite make it to the other side. James and Vanessa are playing air hockey at the table to the right. Vanessa sort of figured out what to do... almost... 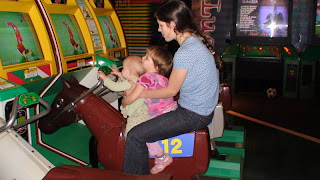 Vanessa and Elizabeth wanted to share my lap for this horse race game. Little ones are great to take to places like the ESPN Zone, because they have fun without even using any tokens! 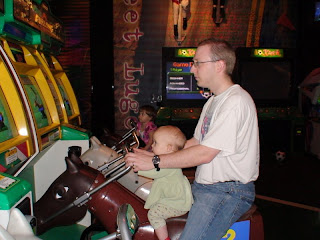 Elizabeth has a turn with Daddy all to herself. 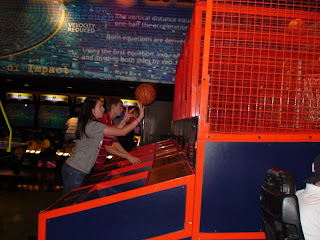 Katelyn pretty much showed everyone up on the basketball game, I think! Well, she is on a basketball team at home, so that's probably why she was so awesome at it! 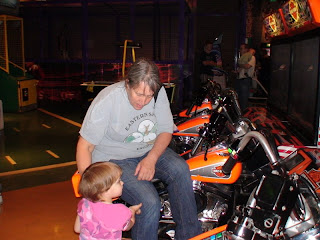 Grandma is about to help Vanessa up on a motorcycle ride. Thank goodness they're not real. I know you love danger, Vanessa, but... 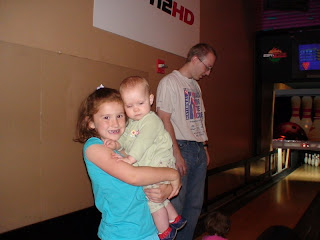 Jadyn really helped take care of her little cousins this trip. I definitely enjoyed the help keeping track of my children! Between Jadyn, Bryn, and their Aunt Hannah, I knew my kids were safe and having fun. 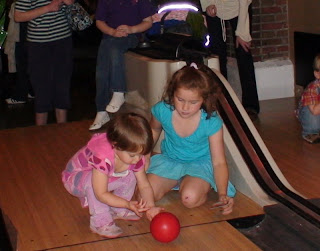 Jadyn helped Vanessa learn how to bowl! Jadyn was so patient with her. I could definitely get used to having Jadyn around! 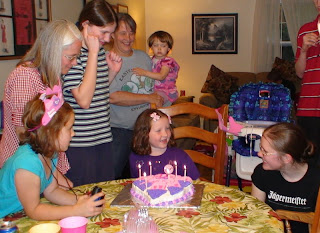 Back at home, we celebrated Bryn's 6th birthday. When Bryn had a little trouble blowing out the candles, Aunt Heather helped out. Both of them have the same birthday, after all! 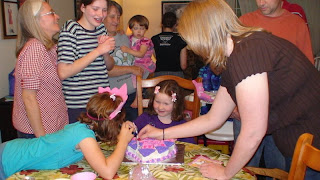 Heidi takes the candles out of the cake before we serve it around. I aim one day to have the kind of cake artistry that Heidi had in making Bryn's cake! We'll see how I do for Elizabeth's birthday on the first of June. (On second thought, maybe I'll outsource it this year!) 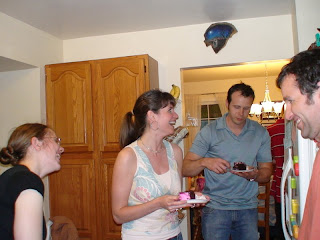 We had lots of amazing family come to see Jake and his girls! I'm so glad that my cousin Tasha was able to make it, despite coming from work and having just gotten back from a trip. I was really glad to have a chance to get to know her husband Mark a little better. (Tasha and Mark are in the middle of this picture.) And I wasn't sure if Heather would be able to make it, but she miraculously made it work! 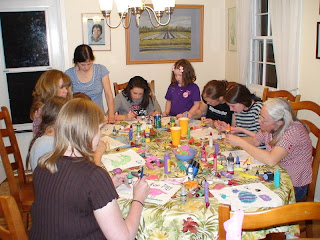 We decided to make a present for Elizabeth's first birthday. We made her an alphabet book! Vanessa had a soft book made with cloth and fabric paint that we made at my baby shower, so now Elizabeth will have a special book too. I keep trying to pick out one or two artists from this table (or the other artists all over my house) to mention as being really amazing, but I can't -- they are all terrific. My mom had the idea to do another book, and brought the materials, and my stepmom had the idea to make it an alphabet book. 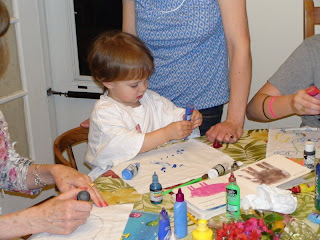 Vanessa had never used fabric paint before. She made a page that was pretty much, well, blue. She definitely had fun! 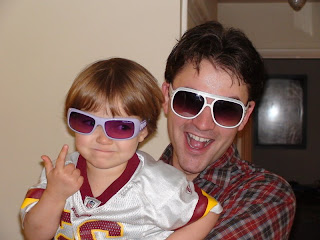 Uncle Zak is the kind of uncle who will always pick you up and never seems to run out of energy. Thanks for being Vanessa's and Elizabeth's uncle, Zak! 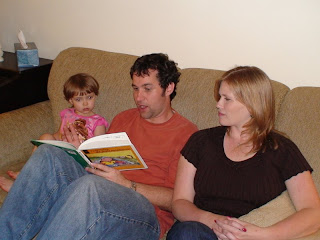 Speaking of awesome uncles, thank you Jake for making the long trip all the way to us and bringing so many fun people with you! Here Jake is reading a book to Vanessa even though it's in Spanish! No wonder Vanessa keeps asking me every day if we can go to Texas. She misses her Uncle Jake and her cousins! 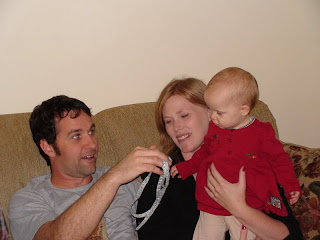 Jake was even able to make friends with Elizabeth, who can be a little slow to make friends sometimes. Well, perhaps it helped that she had Heidi holding her -- Heidi seems to have a way with little girls! 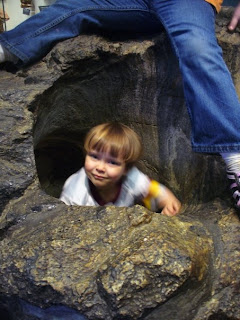 We visited the Natural History Museum in DC. I think the girls liked the rocks and minerals exhibit most, especially the gems. (I stole this picture and the next one from Heidi, thanks!) 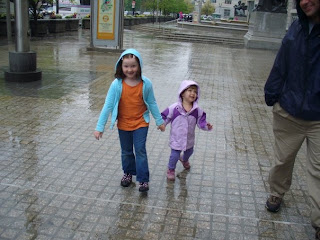 It rained during our walk down to the White House and to the Natural History Museum. The great thing about my nieces is, even though their pant cuffs were wet and their shoes were soaked, they sang and chatted and had fun in the rain! Ah... I miss them already!
Posted by Sarah at 10:10 PM